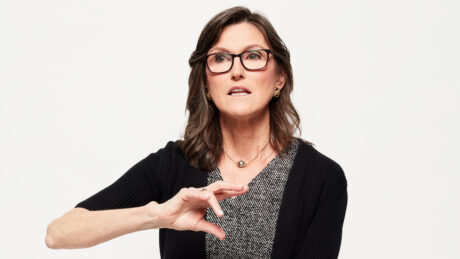 Cathie Wood is no longer a hardly recognizable name in the bitcoin space. The CEO of ARK Invest has become one of the most prominent proponents of the digital asset. Wood had pitched her tent with bitcoin a long time ago and has not looked back since then. In fact, she has proven to be one of the most bullish in the space with her predicted value of bitcoin at $500,000.

Wood had previously placed the asset at the exact value at different times in the past and she seems unshaken in her resolve after reiterating her stance on the matter. Once again, the CEO has come to defend her belief in the exact. For the long-term, she sees the asset rising above $500,000, putting the time frame at only five years.

ARK Invest CEO Cathie Wood appeared on Barron’s on Wednesday. In the interview, the CEO opened up about her expectations for bitcoin and what she believed would drive the digital asset there. The first thing was institutional buy-ins into the asset.

It is no secret that institutional investors have ramped up their stakes in the digital asset market. Inflows for the year broke the record set in 2020 with two months still left to go in the year. Total asset under management for bitcoin quickly rose and is now sitting at a record high of $56 billion, according to the last CoinShares report. This increased momentum, says Wood, is what would drive bitcoin towards $500,000.

Despite the rapid rate of investment among institutional investors, it is still estimated that less than 5% are allocated to bitcoin. However, the trend is growing among big money and Wood explained that if “institutional investors move into bitcoin and allocate 5% of their portfolios,” then bitcoin would hit $560,000.

The CEO expects this to happen but puts the timeline in five years. This means that Wood sees the price of bitcoin touching above $500,000 by 2026 given current investment trends.

The Evidence Is In The Data

One thing that also backs up the CEO’s strong resolve in this prediction is the data recorded on the bitcoin blockchain. Blockchain technology makes it so that every transaction carried out is public information and she explained that this data helps to see how money is changing hands in the space. “We can tell it’s happening because of on-chain analysis,” Wood said.

Although bullish on institutional money coming into the digital asset, Wood had expressed surprise over the recent move by companies such as Square, Tesla, and MicroStrategy diversifying their balance sheets using bitcoin. However, the market expected this given that all of these companies have Bitcoin Maximalists at the helm.

Bitcoin’s low correlation with other cryptos may also be a convincing factor for institutional investors who are looking to invest in the space. “The correlation is very low,” said Wood, and since the correlation of returns by investing is low, then institutions may well be raising their returns and risking less over time, she added.